CONFERENCES OF ICTM (UNESCO) IN CYPRUS 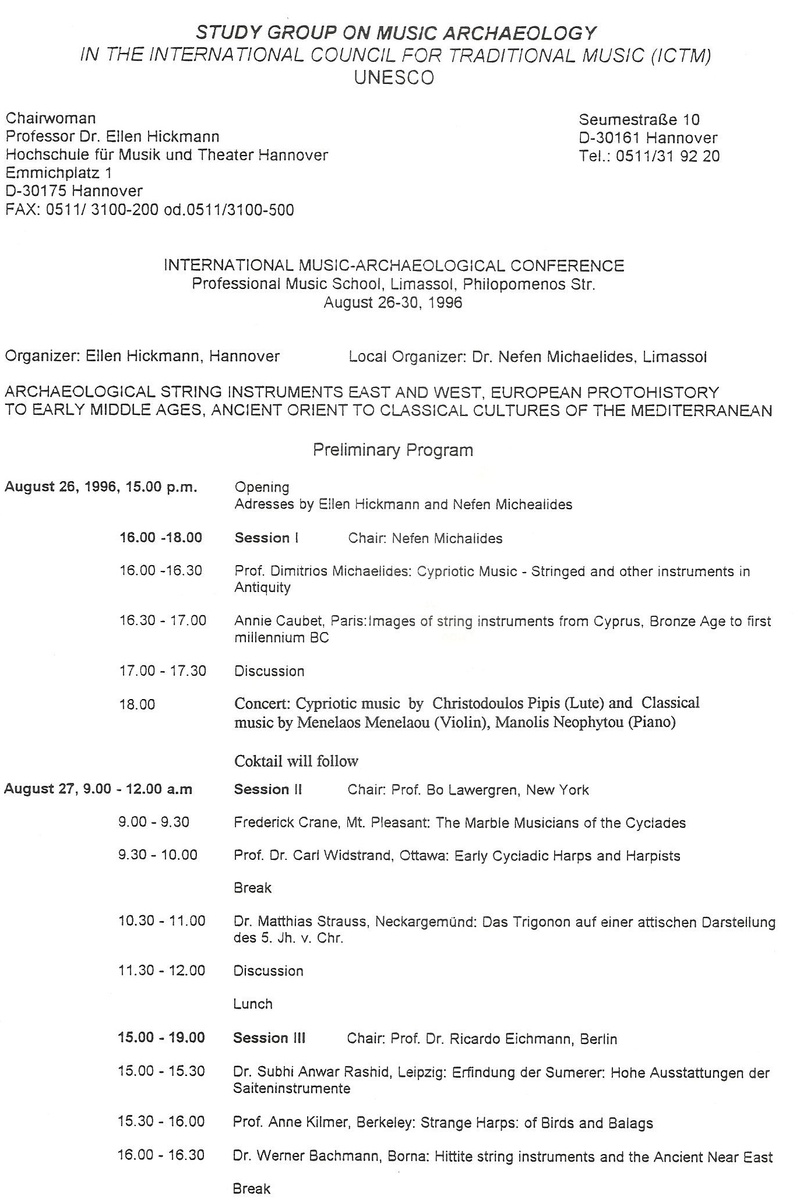 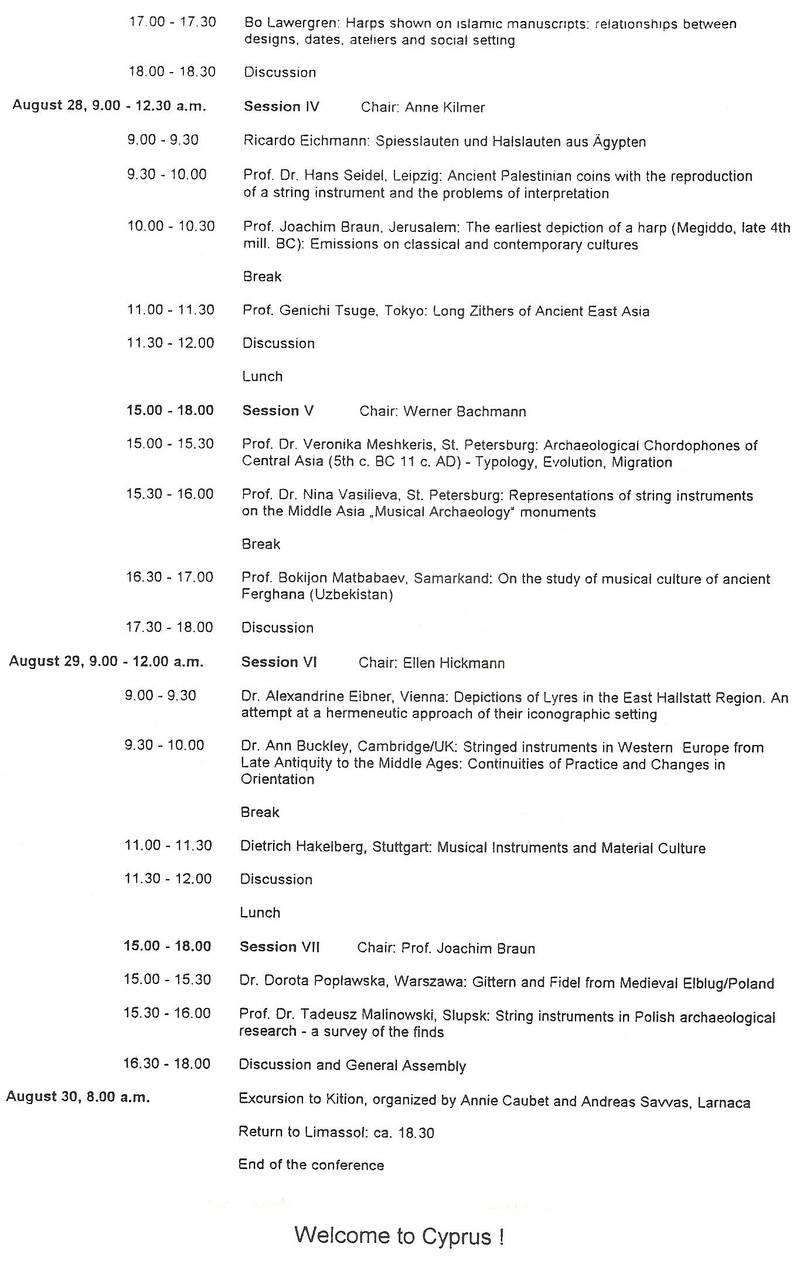 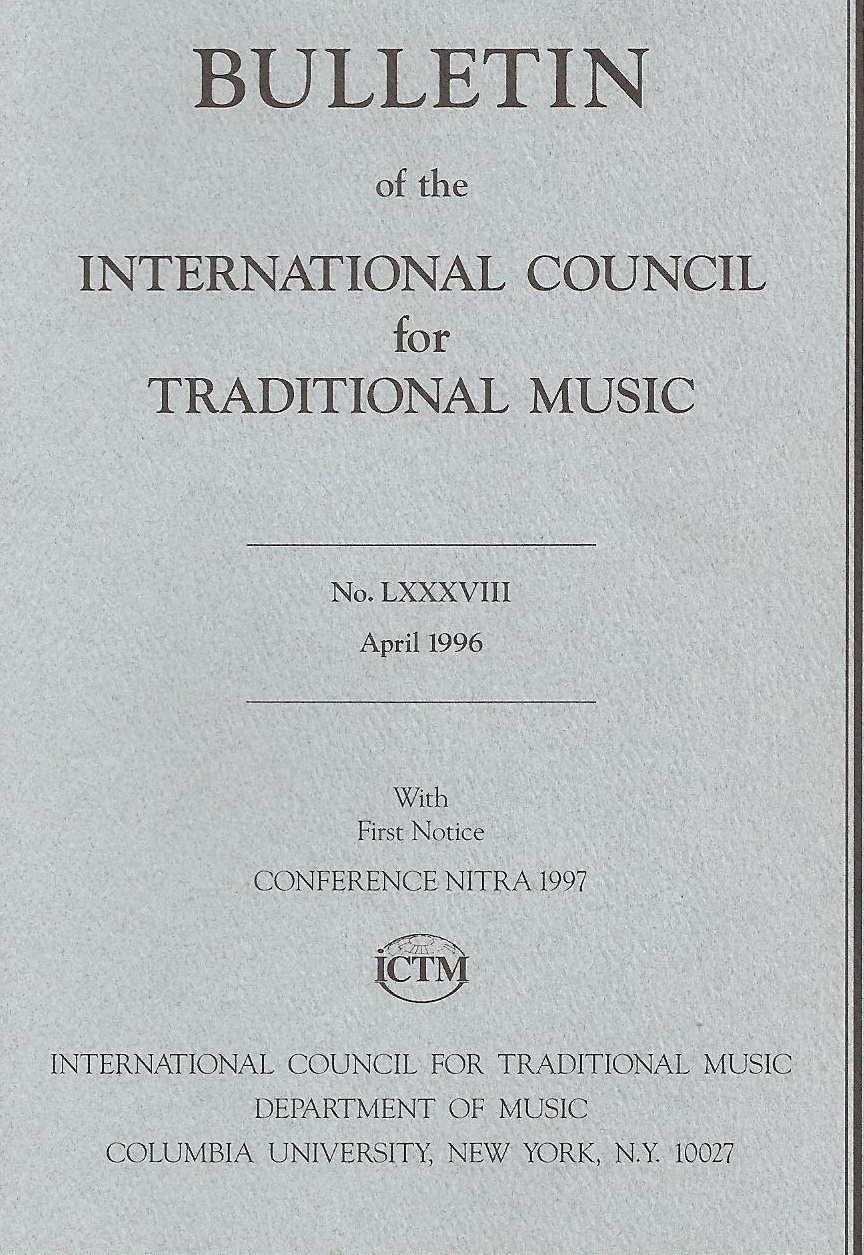 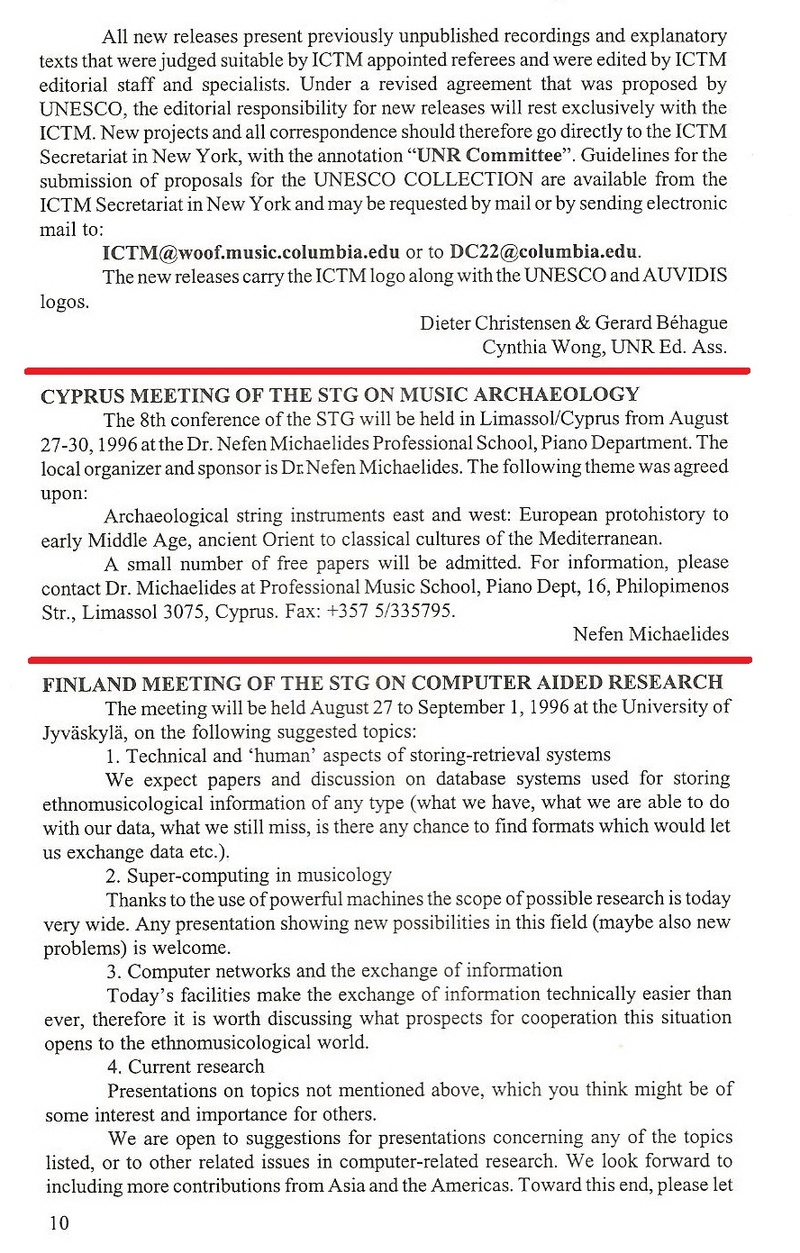 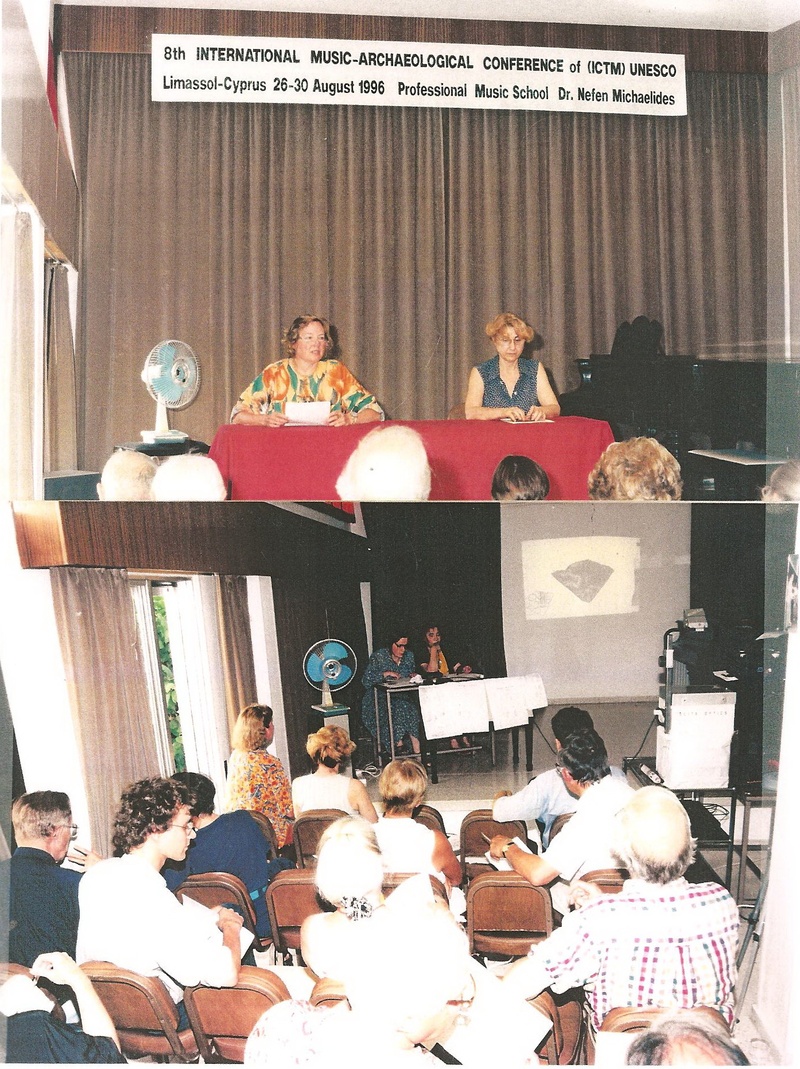 Knowing the profound influence which ancient Greek music has had on European classical music, I proposed at the Sixth Conference of ICTM Study Groups for Historical Sources of Folk Music of UNESCO in 1979, which was held in Yugoslavia that the next conference should be held in Cyprus in order to highlight the traditional Greek Cypriot music and also to encourage further research into it.
I worked voluntarily for three whole years for the preparation of this conference and as a result it successfully took place in Limassol in 1982.
The then Limassol Mayor Mr. Kolakides and the cultural officer of Limassol Mr. Vanellis responded positively to my suggestion and stood by me offering their hospitality to the delegates.
About thirty university professors took part in the conference. They came from Austria, Japan, Bulgaria, Denmark, former East Germany, Czechoslovakia, West Germany, Yugoslavia, Hungary, Rumania and Cyprus.  The first day of the conference was dedicated to traditional Cypriot Music and during the following days various studies on the relations between East and West, which was the main theme of the conference, were read out.
This conference gave a chance to outstanding music specialists from various European countries to find out about Cyprus, its people, its traditional music and culture. As a result the idea of a unitarian Cyprus was strengthened.
As a gesture of gratitude for the hospitality offered towards the delegates, Professor Suppan, who was the president of the conference and a member of the committee which rules as to which country is to receive the European Prize of Folk Art of the F.V.S. of HAMBURG, did all in his power so that Cyprus received this prize.  Following my own suggestion the prize went to "SYKALY" a Cypriot folk group.
The official ceremony for the prize, which was nearly about 2.000 pounds, took place on the 8.9.1984. The then Minister of Education Mr. Katsellis and Professor Suppan addressed the ceremony. Apart from the financial prize the Cypriot group received an invitation to visit the F.V.S. Hamburg foundation which offers the prize.
It has been 30 years (1982 - 2012) since the conference during which I have been undertaking the duties of a national music committee all on my own without any financial support from anyone (see all my musical activities in Cyprus the last 30 years in my website: www.drnefenmichaelides.com). 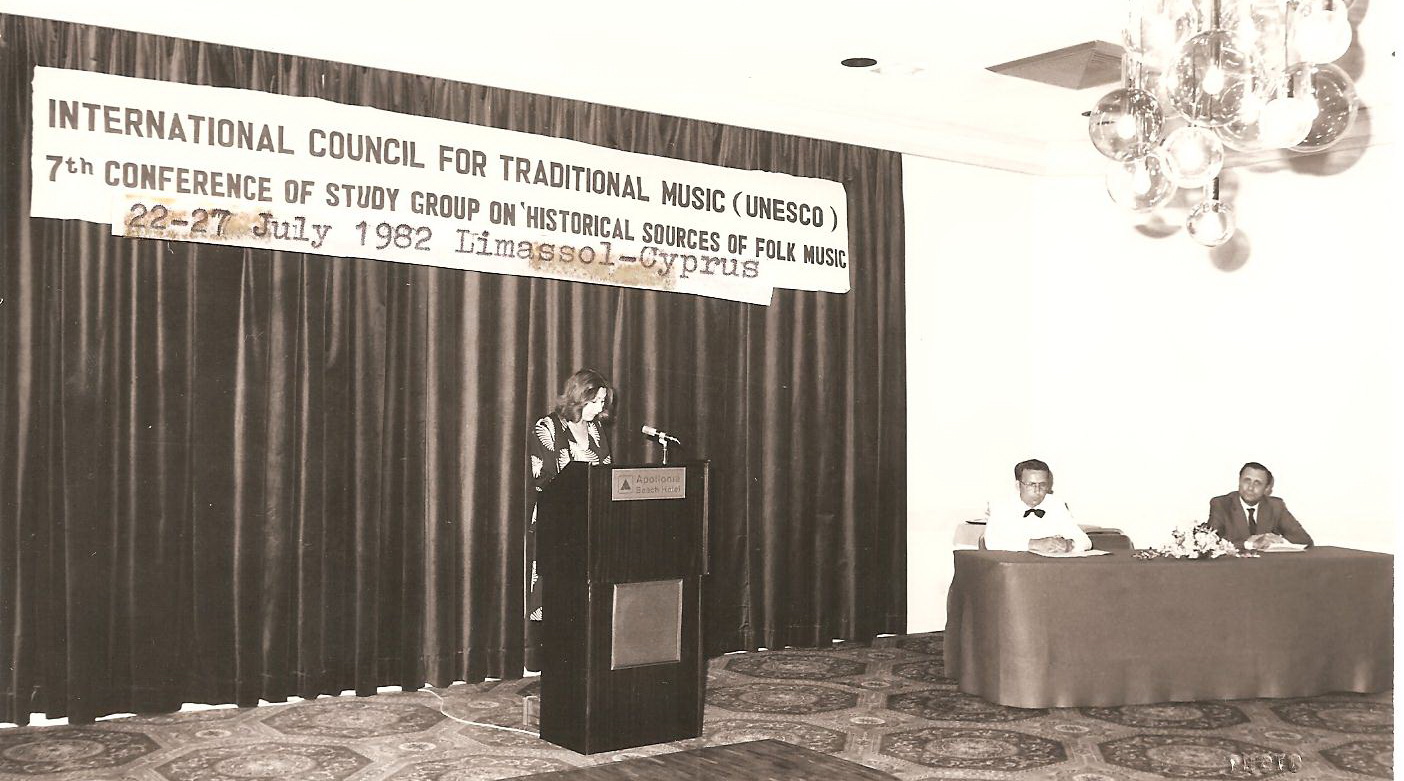 The opening of the conference by the mayor of Limassol Mr. Kolakides, Professor Suppan and    Dr.  Nefen Michaelides.

The representative of the government, Minister Patroklos Stavrou, at the opening. 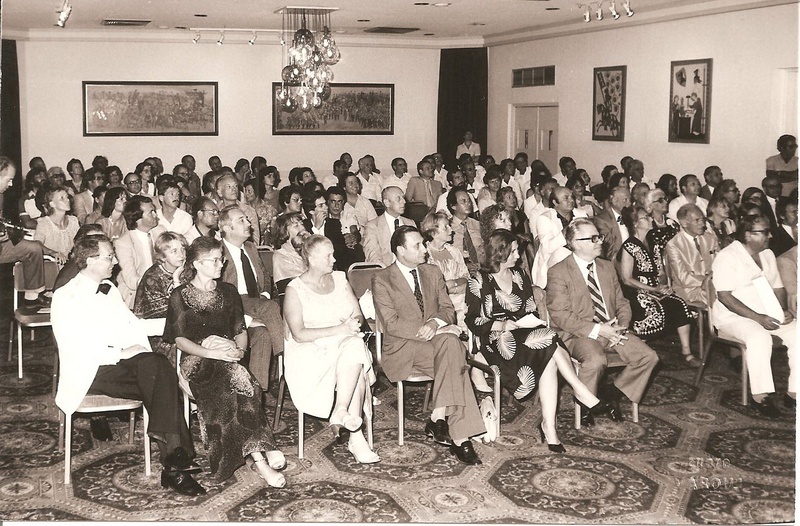 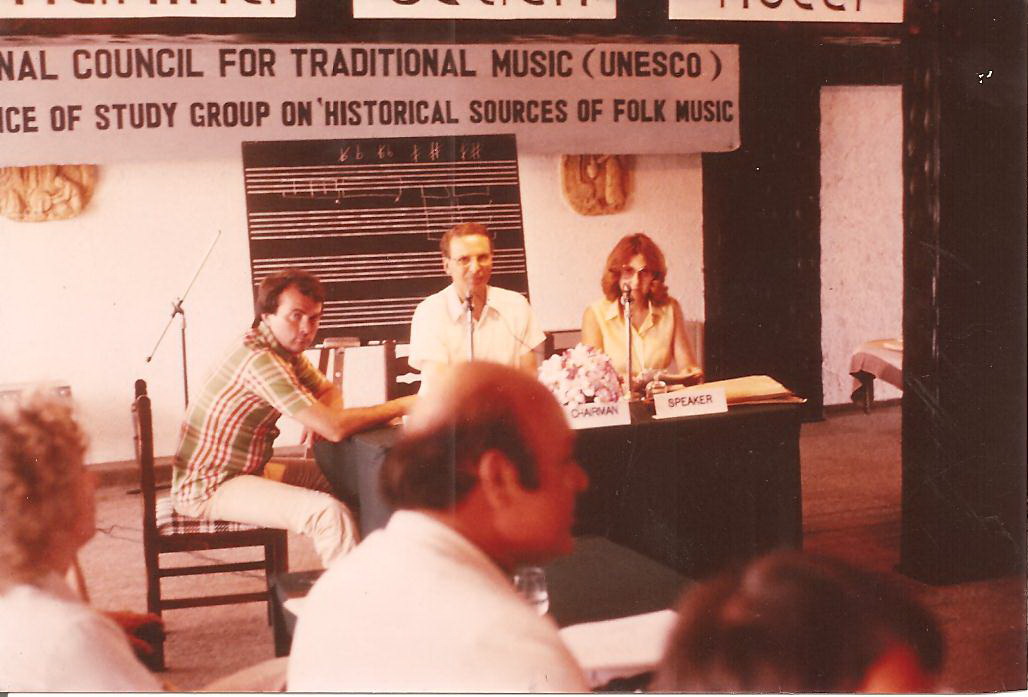 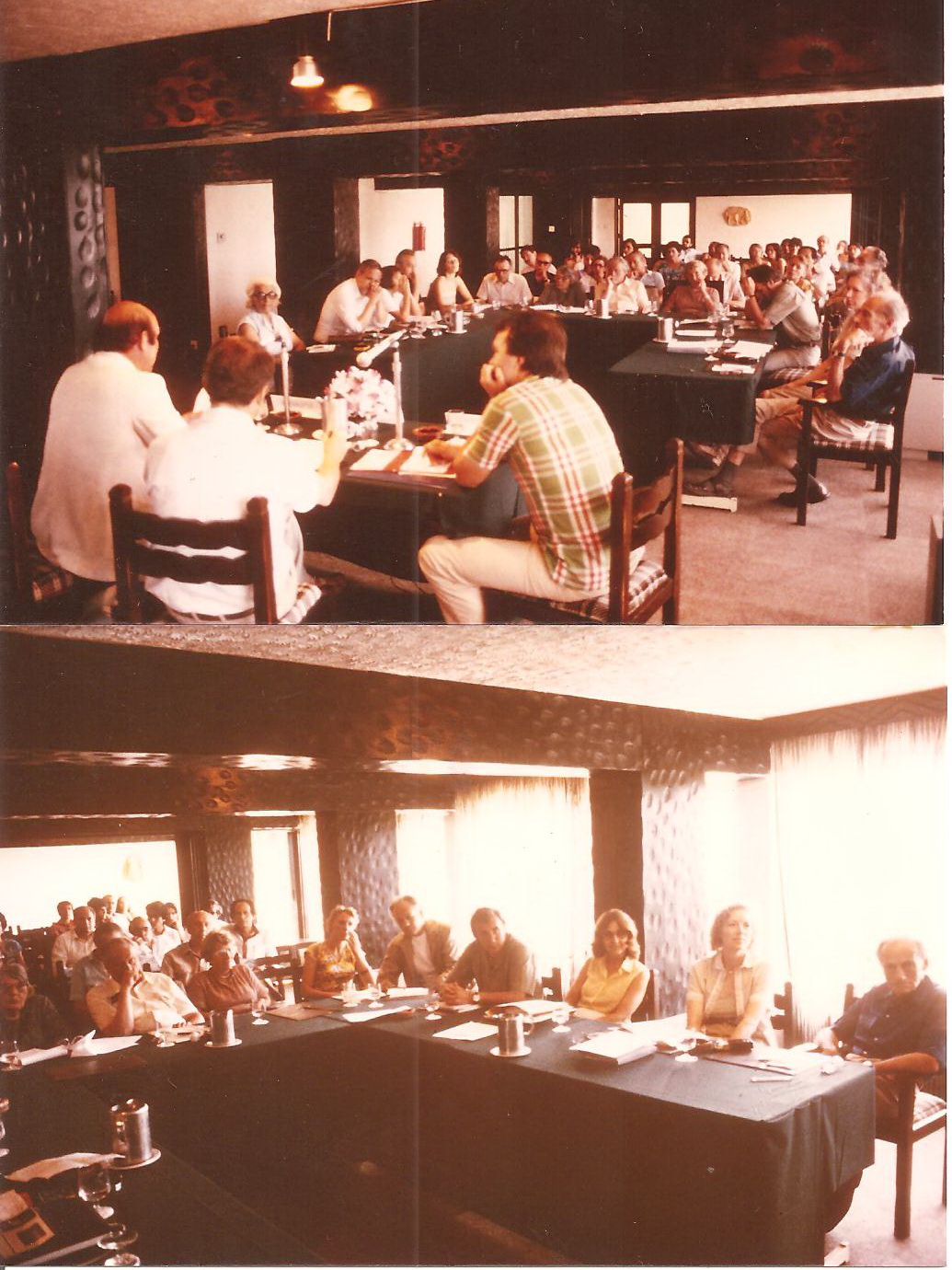 The one week conference where all the delegates presented their studies.

RESOLUTION OF THE CONFERENCE

We, the members of the Study Group on Research and Edition on Historical Folk Music  Sources in the I.C.T.M (U.N.E.S.C.O) express our sincere thanks to the President of the Republic of Cyprus, his Excellence Mr. Spyros Kyprianou, for having had the possibility of holding our 7th conference in Cyprus and declare our willingness to give any required assistance to our Cypriot colleagues in the research of folk music in Cyprus.

We would also like to thank the Town Council of Limassol and the musicologist Dr. Nefen Michaelides for the very good organization and the smooth running of our meeting in Limassol.
As a result of our work we present the following suggestion to our Cypriot colleagues:

1.  To found an archive for Cypriot folk music; to centralize and classify all collected sources.

2.  The exchange of specialists between our institutes and Cyprus.

3.  The exchange of documentation between our institutes and the Cypriot archive of folk music.

4. To apply for membership of Cyprus in the I.C.M.

5.  We support the right of Cyprus of preserving its cultural heritage.

6.  We request the president, Mr. Spyros Kyprianou, to support our Cypriot colleagues in materializing this suggestions. 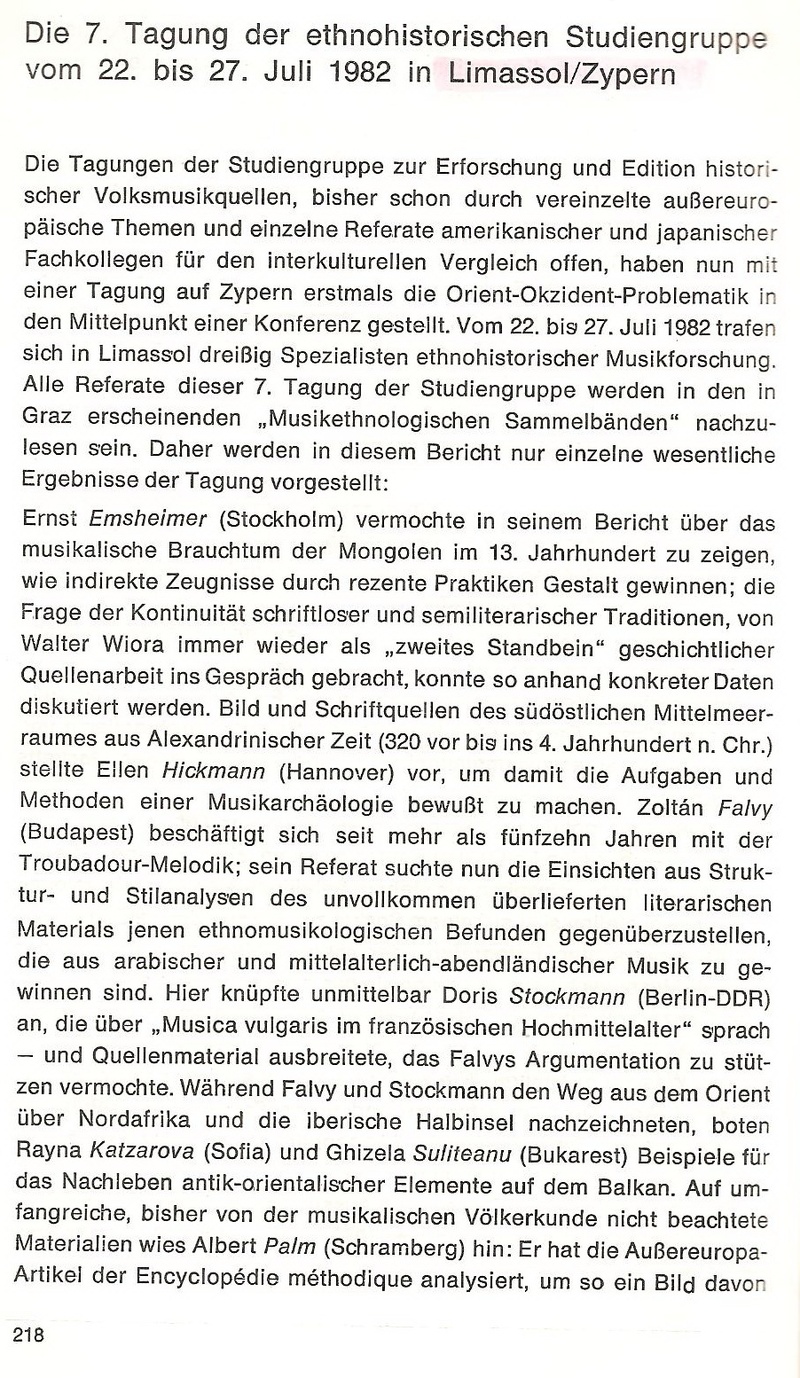 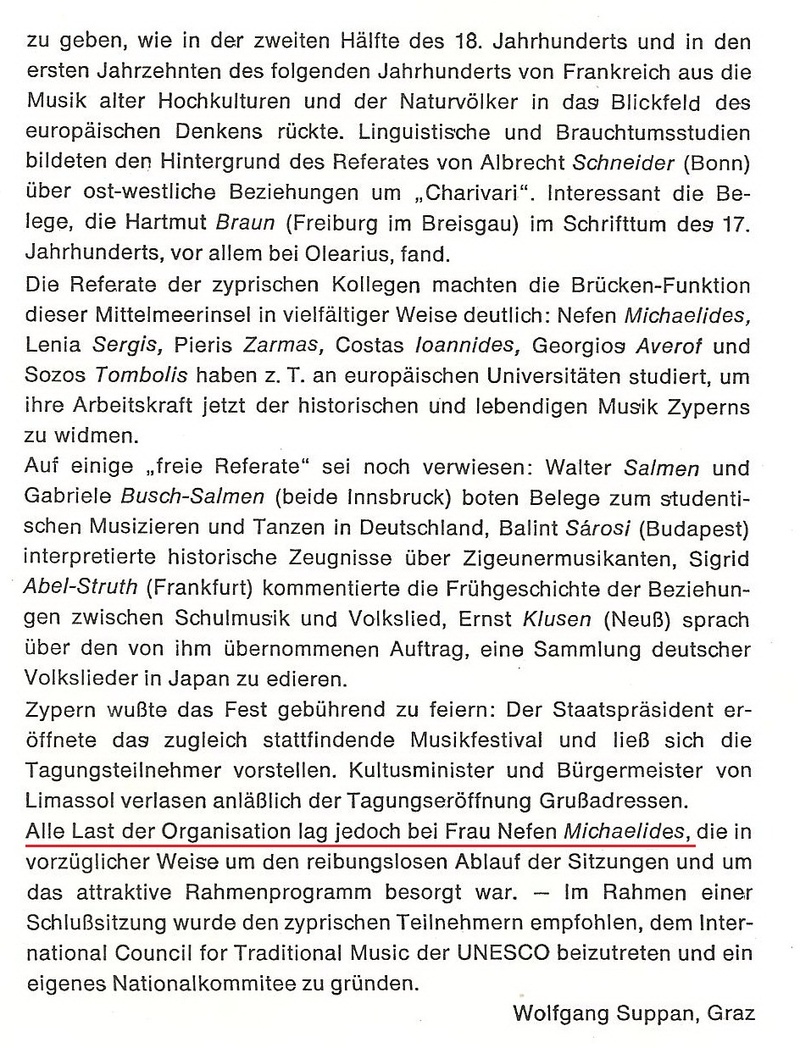 From 'Bulletin of the ICTM' 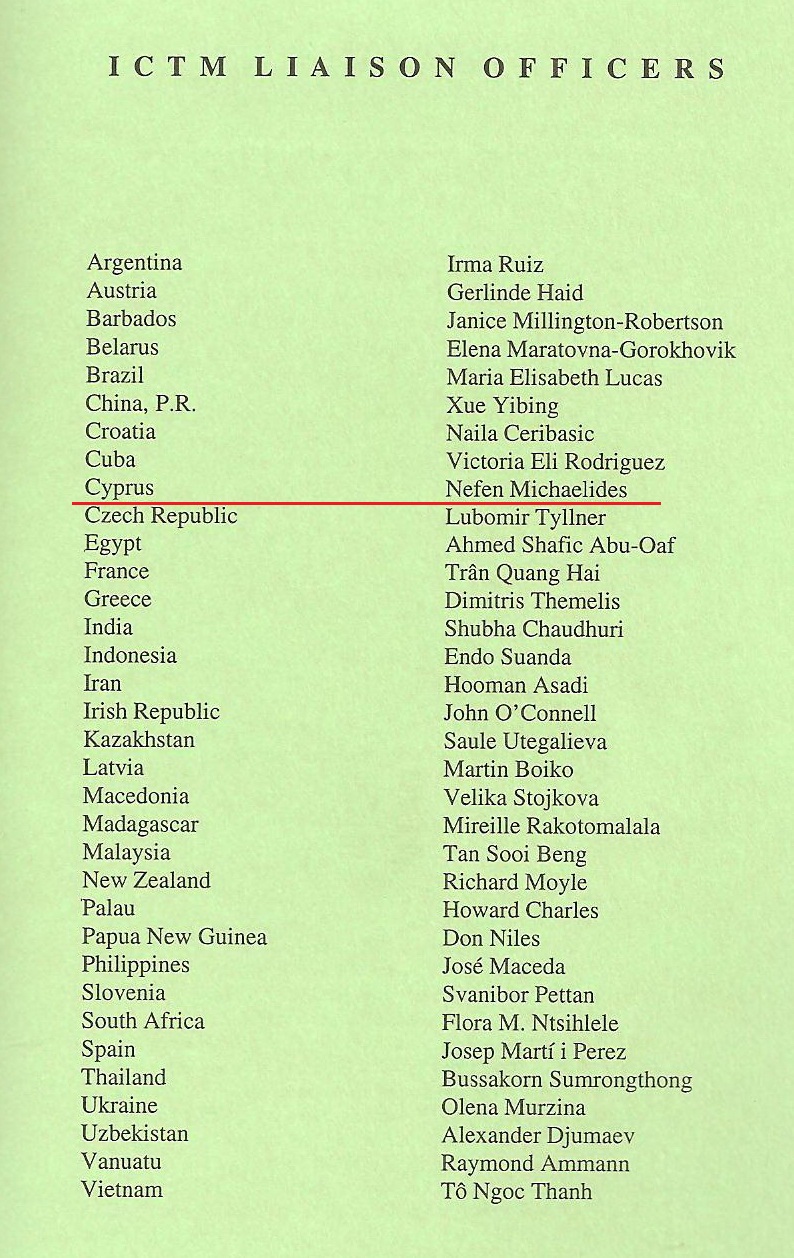 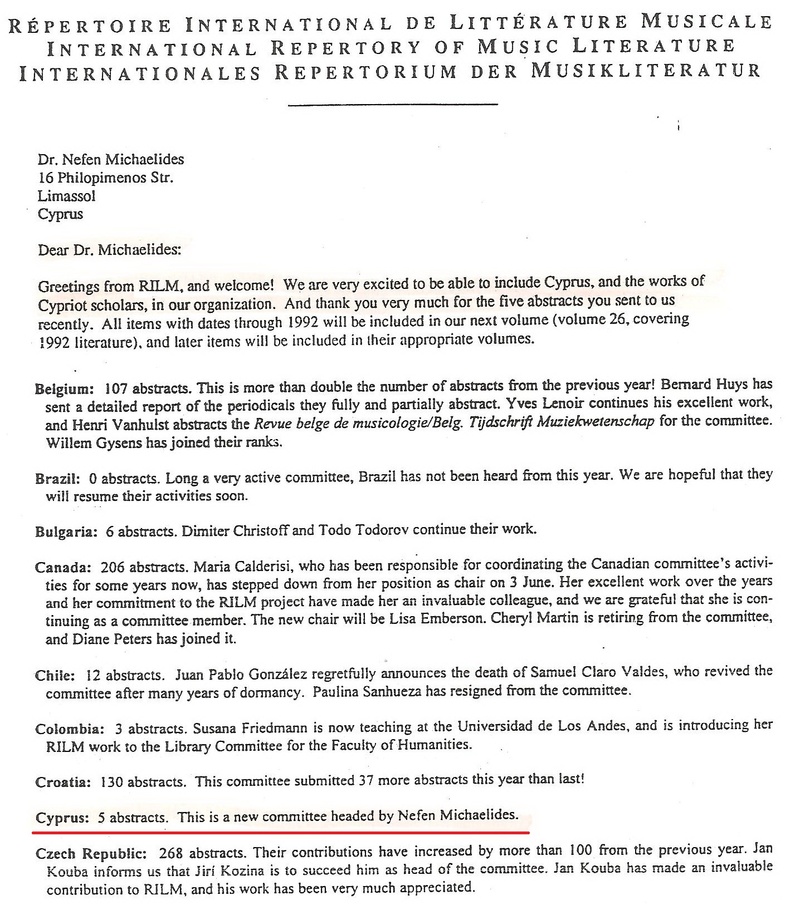 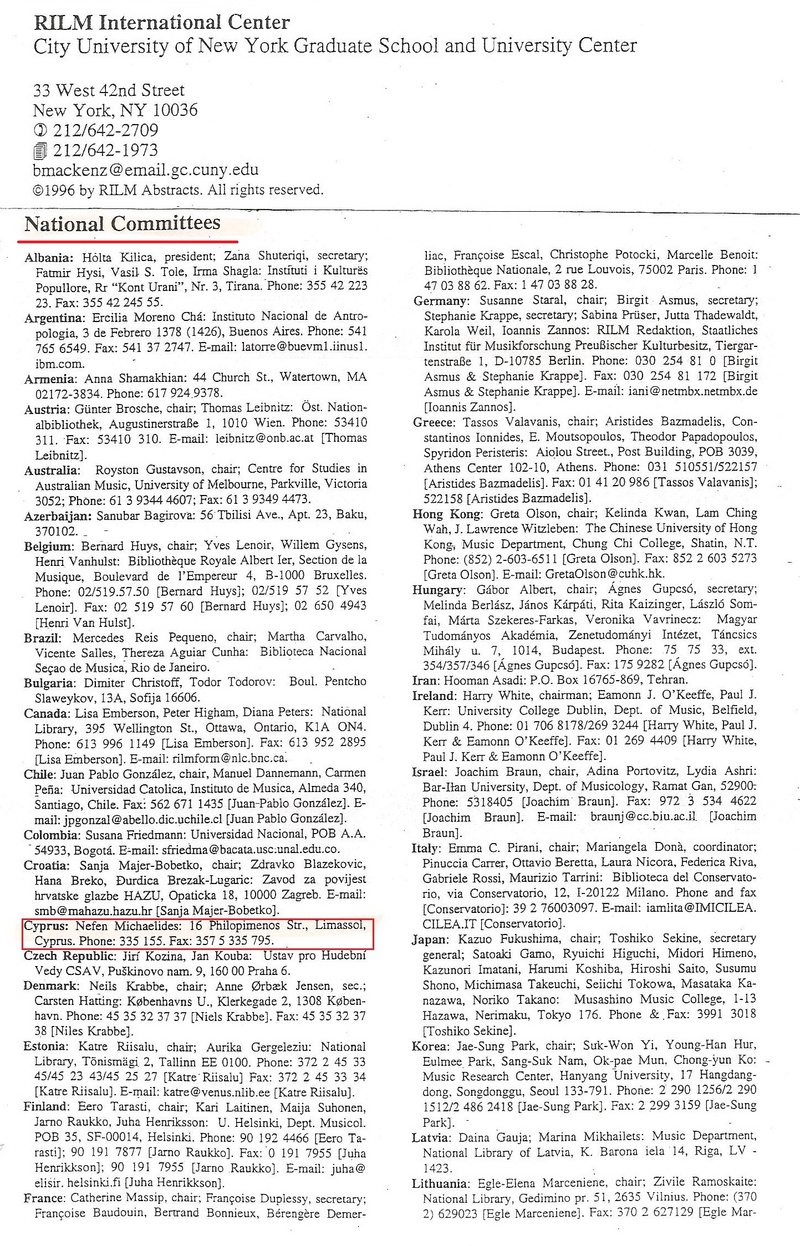 Practical proposals for applied ethnomusicology in the field of education

Presented by Dr. Nefen Michaelides (previous Liaison Officer of Cyprus in ICTM from 1982 - 2001)

At the 3rd Symposium of the ICTM Study Group on Applied Ethnomusicology, Nicosia, Cyprus, 18-22 April 2012

The common culture of a people, its language, its music, its customs and even the land it lives on, form the main characteristics of a nation.
The destruction of these elements leads a nation to catastrophe. This is the reason why many countries in the world are interested in the revival of their cultural heritage, particularly those countries struggling for their freedom. The deep influence which traditions have on the development of a national feeling is a fact, which nobody can deny. They are a significant factor against foreign domination, for the protection and strengthening of independence, because these traditions mark the historical path, the present situation, the character and the development of a group of people.
The traditional music in the area of the Mediterranean in general did not only remain stagnant on the level of the twelfth century, but is these days in danger of disappearing altogether. This fact, however, is being observed by specialists all over the world and many attempts are being made to rescue traditional music. Certainly it is not only important to rescue this music, but also to develop it up to the level of European music, the music of the great composers.
In this respect one has to praise Cypriot composers like Theophanis Dymiotis, Andreas Tsiartas and many others. They have raised the Cypriot traditional music to a very high level by developing elements of this music in their compositions in a masterly way. In his composition "Duo for Violin and Piano" the composer Theophanis Dymiotis has brilliantly transformed a Cypriot folk song into a highly developed atonal work of the twentieth century. One can put this work on the same level with works by Skalkottas and Schoenberg.
The composer Andreas Tsiartas reproduces the sound colours of the Cypriot Traditional Musical Instruments in his orchestral work "Prayer" in which also he transformed the Cypriot folk song Ayia Marina.
This is the right way of developing and giving life to traditional music.
The traditional music is the second mother language of a people. Each people has two mother languages, the one of words and one of sound. Therefore it is of great importance to teach children their traditional music at school from an early age together with their mother tongue.
Concerning Cyprus, a systematic research should be done about its traditional music with the aim of developing its own musical doctrine based on genuine Cypriot music and laid down in a form teachable at school side by side with the European theory of music, the teaching of which must in no way be neglected. This should be a component part of the national education programme.
Also special music schools for training professional instrumentalists of traditional music should be established by the State. This is the only way to keep traditional music alive.
There must be a balance between theory and practice in the preservation of traditional music. It is not enough to have archives full of books; they will remain mute and dead unless the music is being practiced in vocal or instrumental performance.
One of the best methods of preserving traditional music are recordings of live performances, because it is the most exact reproduction and closest reflection of this music. Using the European notation system to write down Cypriot traditional music destroys the most important characteristic elements of this music. The European notation system does not include the characteristic intervals of Cypriot traditional music.
The above gives some important proposals how to preserve, keep alive and develop Cypriot traditional music.

Report by Dr. Nefen Michaelides, jury member of the composition contest organized by the Cyprus Ministry of Education 1985, about the composer Theophanos Dymiotis.

Excerpts from the report in English
"Theophanos Dymiotis...  dissolved the traditional Cypriot folk melody into its smallest atomic elements and spread those elements throughout the whole composition from the beginning to the end in a masterly way creating a wonderful dialogue between the violin and the piano".
"Only by the KODA he collected all these elements again of the given theme appearing it in its original form".
"Such a Cypriot composer could be the savior of the traditional Cypriot music, which is in danger to disappear".  "... and needs to be developed by such a composer in order to raise the level of this music and make it alive".